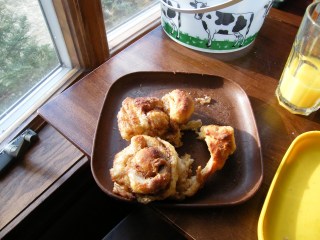 I have not stopped my pursuit to bake bread.
I have not been able to tell you about it due to unforeseen circumstances…Okay, so the birthdays and visits from Grandma and Grandma and Aunt Ruhama were foreseen.  What was completely debilitating and unforeseen was my sickness.

Gianna, Don’t you think that may have been a bit extreme?

Maybe a little, but I did think I was going to suffocate myself by talking.
And if you know me, you know that I like to vocally use my words (as well as visually).

However, these past few weeks, I have decided to practice baking bread differently.

My new BFF (who knows not that I exist–and that’s okay because someday she will), the Pioneer Woman (I don’t read her blog.  It’s too much for me, but I AM using her cookbook and am in love.  As is my husband!), had encouraged me to cook.  From Scratch.  This means making pizza crust and cinnamon rolls from flour, yeast, oil, and water.

With the addition of sugar, cinnamon, and butter for the cinnamon rolls.

The first time I made the rolls, the supergirls were involved.
I was so shaking in frustration with my lack of ability to make them properly.  Or so I thought.  I told the girls that I wasn’t mad at them, just frustrated in general.

And do you know what Wordgirl–whose words get her in too much trouble–decided to tell me?

“That’s why you need to take cooking classes, Mom.”

I’ll give you one guess of how I responded.  Here’s a hint.   Just like every loving mama should.

When they were all put together (completely wrong and utterly disasterously, I might add), I let them rise and baked them.

Keel over and die.

Moral of the story:  Relax.  It is not the end of the world.  They are cinnamon rolls for goodness sake!

I am a child of God who has been given the humbling job of being a wife and a mother to 4. Those whom He has given to me are my Sweet Peas and Buddies and one Honey.
View all posts by giannarae →
This entry was posted in baking bread. Bookmark the permalink.